First and foremost, the Pilot Hi-Tec-C Maica looks pretty darn slick. The fancy logo, the jewel-like moulding on the cap, and the smoothness of the barrel combine to create a very beautiful pen. Somewhere along the line in the design process, however, they decided to replace the clip of the pen with a small loop, which I suppose is meant to attach to a lanyard or bracelet. In practice this loop really only acts to prevent the pen from rolling off tables, and I personally would just prefer a clip stuck to the side.

While I’m usually a bit wary of 0.4mm tips (or anything  smaller), as they can sometimes feel like I’m about to cut through my paper, this Hi-Tec-C gel refill writes very smooth. In fact, I’d even consider going to the 0.3mm tip, a size I typically avoid. And though I’ve had issues with the ink skipping temporarily, necessitating a few scribbles on scrap paper to get it flowing properly, it hasn’t happened enough to become an annoyance.

It’s a pretty good pen overall, and I think minor improvements could make it a great pen: a slightly thicker barrel, a slightly more comfortable grip area, or – what the hell – I’d love a retractable retooling of this pen design while they’re at it. Regardless, the Hi-Tec-C Maica looks cool and writes well, and it’s a pen I plan to keep handy. 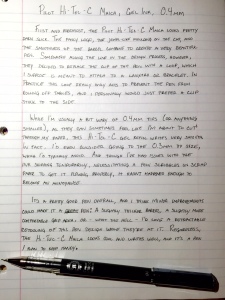