Late last year, the guys at Baron Fig announced three new subscription services; one for their Confidant notebooks, one for their Archer pencils, and one for their Squire pens. I already have too many notebooks, and I don’t really use pencils. But the Squire pen subscription – that is something I was interested in, especially after my original Squire, from Baron Fig’s Kickstarter campaign, was lost. So I purchased the subscription, and the first of four quarterly edition Squires arrived at my doorstep earlier this week.

With this first limited edition, called “Alphabet,” Baron Fig played it pretty safe. There is very little I can say here that I didn’t already write in my review for the original Squire – it’s identical in regards to size, shape, refill, construction, and twist mechanism. The big difference is that this edition has a matte black body, whereas previous color options were silver and charcoal. And in place of the Squire sword logo, this edition has the 26 characters of the English alphabet printed vertically down the pen’s barrel.

Besides that,  the packaging has also been updated from a square box to a rounded one (a close resemblance to the current Retro 51 Tornado packaging), and the twist retracting mechanism seems a bit smoother.

Although the ‘alphabet’ theme seems superfluous, I do think it makes sense for the very first pen in the Squire subscription-series to be fairly standard. Frankly, I’d have been just as happy with an all-black “stealth” edition. Still, I wouldn’t mind something a little more exciting next time, such as a bright color or (dare I suggest?) a pocket clip. But whatever Baron Fig ends up doing with the second Squire in this subscription-series, I suppose it’s a good sign that I’m looking forward to finding out. 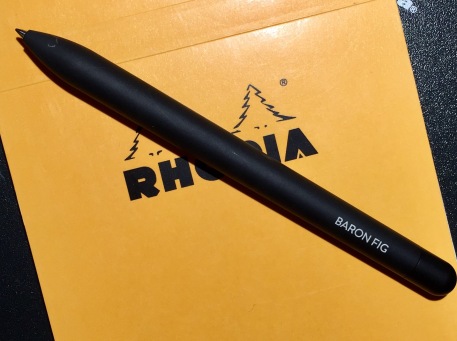