With its bland black/grey barrel and a partially-transparent ink window, there’s nothing about the BIC Triumph 537R that really stands out. Still, this needle point roller pen draws surprisingly clean lines despite the fact that it drags a bit on the page. It’s a nice pen to write with, and it would make a decently good pen if not for the awful barrel and cap design.

The main problem is that the cap has a tendency to stick, whether it is locked over the tip or posted on the barrel. There are times when removing the cap is literally a double-fisted endeavour. To make things even worse, the cap connects to the barrel in the same spot where the refill threads in. So sometimes removing the cap (or even spinning the cap slightly in the wrong direction) will cause the refill to become partially removed from the barrel.

If BIC were to keep the refill but fix and snazz-up the barrel, then this pen could be worth using. Until then, there’s no reason to bother with the Triumph 537R. 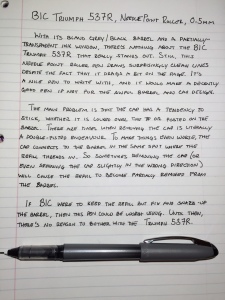