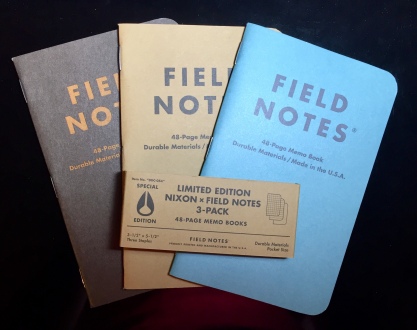 Many Field Notes fans are familiar with the special edition Nixon notebooks from 2016. It was a good collaboration, and those summery notebooks remain popular. However, all but forgotten are these notebooks that Nixon released a year earlier, in 2015. Although 2015 was a peak year for Field Notes collectors, the 2015 Nixon notebooks just never seemed to be highly sought after.

Each pack contains three notebooks. The first is a turquoise/gray book, which is far and away the most eye-catching one in the pack, though it contains plain inner-paper. The second is a dark brown book with ruled paper. And the third book looks very similar to the standard grid-ruled, Kraft Field Notes notebook, though it has dark-brown printing on the inner cover. These notebooks use 100# cover stock, 50# paper, and light-brown ink for the ruling.

The 2015 Nixon Field Notes books have long been sold out, but I don’t personally consider it too much of a loss. I find the books a little to plain, to be honest. But if anyone ever decides to release 3-pack of those turquoise books, it’d be an easy impulse purchase for me (just as long as it’s made with graph paper).