The Pentel Energel Alloy RT is meant to be the “durable” version of the Energel Deluxe RTX. The design of the two pens is nearly identical. They share length, width, and general aesthetic features, with the only major difference being that the body of the Alloy RT is entirely made of aluminum (hence its name). In any other pen I might consider this a lazy cash grab – “let’s cast the pen in aluminum and charge five times the price!” – but the Energel refill is so good that I think the Energel Alloy RT might actually be a bargain.

Aside from some rattling in the tip, the Energel Alloy RT feels like a high quality pen. It’s nicely balanced, has a sturdy “click” mechanism, and given that there’s no padding on the grip section, manages to be fairly comfortable. If Pentel removed all its branding, I’m convinced they could sell this pen at a specialty shop for 20 dollars or more. As is, however, it’s easy to find the Alloy RT for 10 dollars or less.

For fans of the Energel Deluxe RTX (or just the dark, smooth ink in its refill), the Alloy RT is a great pen to have. For those frugal enough, it might be possible to save money by simply refilling the Alloy RT (rather than buying a box of Deluxe RTX pens for 20 dollars or more). But personally, I like the Alloy RT because it feels like a high-quality pen, and it uses a great refill. 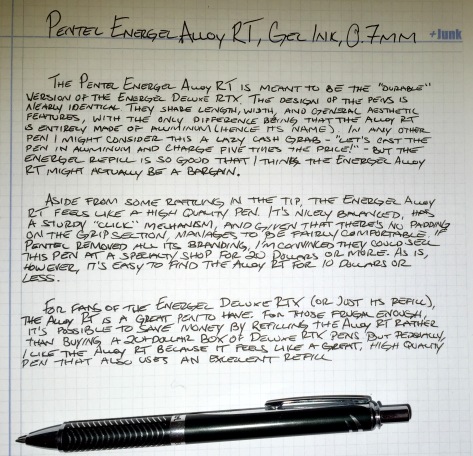