It doesn’t take long to realize that the Sakura Sigma Micron is a high-quality porous point pen. Along with it’s sturdy metal clip and light body, it lays down clean and crisp lines with only slight smearing and minimal bleed-through. Beyond that, the Pigma Micron’s big selling point is its “archival ink,” which it prominently advertises on the barrel of the pen.

In the words of Sakura, the archival ink is a “permanent, fade resistant, chemically stable, pigment-based ink” that will not “bleed or run if liquids are spilled on or applied to the document after the ink has dried.” Plenty of other pens are advertised with similar features (like the the uni-ball Signo 207), but since Sakura makes a big point of it, I decided to test it out. 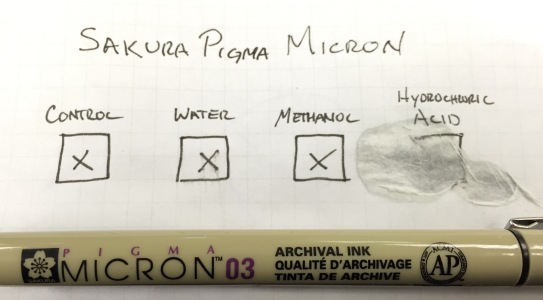 I placed a few drops of water, methanol, and hydrochloric acid on a page with Pigma Micron ink, then quickly wiped it off. The water made the ink smear a little bit, but the methanol surprisingly had almost no impact. The Pigma Micron stood no chance against the hydrochloric acid, however, which actually began to eat through the paper before I wiped it off. All in all, I’m impressed.

Regardless of it’s archival ink – which, to be honest, is overkill in most situations – the Pigma Micron might easily be one of the best porous point pens available. My only complaint is an annoying ridge right in the middle of the grip section where the cap secures onto the barrel, making it a little uncomfortable to use. Still, this may be just a personal gripe having to do with the way I hold a pen, and anyone looking for a good porous point pen will likely find a winner with the Pigma Micron.