I’m a die-hard user of 3.5″ x 3.5″ pocket notebooks, especially those made by the ever-creative people at Field Notes. In fact, I subscribe to their Quarterly Edition notebooks just so I can get their latest designs as soon as possible. And though I’m usually excited when I get a new set of pocket notebooks in the mail, when Field Notes announced the new Byline edition earlier this summer, my enthusiasm wasn’t as immediate.

Instead of the standard pocket size, which I’m used to, Byline is a 4.75″ x 7.5″ reporter-style notebook. It flips open vertically and uses wire binding. After ripping open the shrink wrap and looking it over, it’s likely that most Field Notes subscribers like me were forced to ask themselves, “what the heck am I going to use this for?”

Putting that question aside for a moment, I think it’s obvious that the people at Field Notes put a lot of thought into this product. According to their website, they are frequently asked for a reporter-style notebook, but they didn’t commit to producing one until the request came from the host of CBS’ Face the Nation, John Dickerson, who also offered to lend a hand in the project.

Together they came up with this 70-page, wrought iron (gray) book. It has durable, 120# cover stock, and it contains 70#, college-ruled inner paper. The pages are double-sided, and they are wire-bound with precision for easy flipping. The inside of the front and back covers are loaded with information, much of it more interesting than useful, such as an explanation of why the news media is sometimes called “The Fourth Estate.” The back cover also has a little pocket that comes with a promotional chapter from John Dickerson’s latest book printed on a cutesy mini-newspaper.

Where the traditional Field Notes pocket notebook is great for keeping lists or taking down shorter bits of information, the Byline edition is much better when longer notes are required. The obvious application is for in-the-field interviews, as Byline slips nicely into a jacket’s vest pocket, but I found that it works great for things like writing out book references or keeping notes for movie reviews. I tested out that latter use case, taking notes for brief movie reviews (which I’ve published on Rotten Tomatoes).

Still, I don’t currently have much use for this format, though I can’t deny that it’s a good notebook. Many others will certainly love the classic aesthetic of the Byline edition, and Field Notes has produced a limited number of 2-packs, so they may sell out sooner rather than later. So if you think you’ll find it useful, it might be a good idea to order soon. But, sadly, the amazing Byline sticker that came with my subscription cannot be purchased separately. 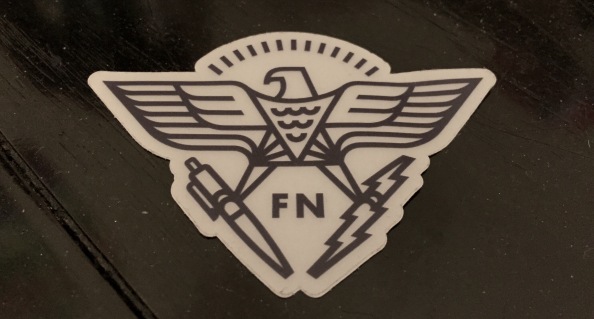