This is the fifth part in a series in which I’m learning to use fountain pens. For the previous installments, click here.

Chalk it up to a bad experience, but I really had no desire to pick up a new fountain pen after putting down my Lamy Safari a few months ago. I’d already purchased a pen – a TWSBI Eco – but I couldn’t bring myself to ink it up. So I decided to let it sit, shrink-wrapped on my desk, for about a month. When curiosity finally drove me to break open the packaging, I realized pretty quickly that my experience with fountain pens was about to change for the better.

Just to look at it, it’s obvious that the Eco is one of the coolest pens I own. In the lingo of the fountain pen world, it’s referred to as a demonstrator pen, a style that indicates a clear-bodied pen that makes all the inner workings visible. Filled with a dark red ink, “Rouge Hematite” by J. Herbin, it’s neat to watch the fluid slosh around the pen’s innards and move through the feed toward the nib. It’s certainly eye-catching. In fact, a co-worker of mine recently mistook the Eco for an e-cigarette and erroneously scolded me for picking up the habit of smoking.

In addition to its looks, I’m very happy with the way the Eco writes. Various nib styles are available, but I decided to blindly go with a stub nib. Luckily, this turned out to be a great choice, as it seems to give a professionally stylized character to my print handwriting. This has everything to do with the shape of the nib, which looks to my eye like a narrower, rounded-off italic nib. This gives it a vertical/horizontal line variation that is a lot more subtle than what you get from a calligraphy pen.

It’s worth noting, too, that the Eco’s piston filling mechanism holds a lot of ink. A piston mechanism, I’ve learned, works almost exactly like a cartridge converter; simply dip the nib into a bottle of ink, then twist the end to suck the ink up into the reservoir. There’s really only one difference between the two filling systems: instead of the a cartridge being housed inside the pen, the pen’s barrel is the ink cartridge. Yes, I have some anxiety about the pen coming apart and ink spilling everywhere, but it’s something which – knock on wood – hasn’t happened yet.

I’m happy to report that the Eco is the first fountain pen I’ve found myself coming back to again and again. I’ve even considered buying a second one with black trim that I’d fill with a black ink to match, but that’s a little ways down the road. For now, I’m excited again about trying another new fountain pen.

Shortly after writing about the Zebra V-301, the fountain pen that barely worked, I received an email from one of Zebra’s product managers. The V-301’s design was in the process of being updated, and I was asked if Zebra could send me one to try out. I agreed, and a few months later, the new V-301 arrived in my mailbox. 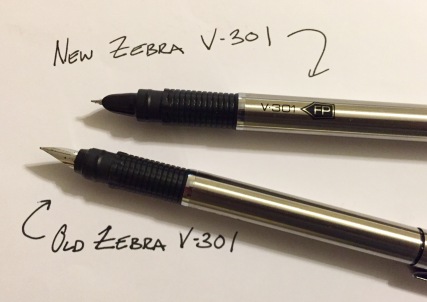 On first inspection, the new V-301 looks practically identical to the older model. Take off the cap, however, and it’s easy to tell that the nib has gone through a bit of an update. A shroud now covers the nib and feed section, and it’s likely that there are more changes underneath. Whatever the case, I can say that the V-301 now works a lot better. The new model writes much more consistently (and right side-up), and the ink flow has been reduced. I’ve also noticed that the cap of the new model posts a lot more securely than the old one did.

It’s still not a particularly smooth fountain pen, and I think the clip could use some beefing up. But for a fountain pen under $5, it’s not bad. At the very least, I’m happy that Zebra listened to their customers and made improvements.

Fountain pens, frankly, are intimidating. For someone like me who’s never used one, they seem a bit finicky and archaic. Learning to become a fountain pen user seems almost like learning to drive stick or learning how to ferment homemade vinegar. There are fervent advocates for all these practices, but to an outsider, they seem like they might be more trouble than they’re worth. So why bother?

Type “why use a fountain pen?” into Google, and you’ll be met with a host of reasons listed on various websites and blogs.  Unfortunately, most of these reasons just don’t speak to me. For example, a blog at oPENions describes how fountain pens can be great for left-handed writers, but I’m not a lefty. A blog at Writer’s Bloc does a great job of explaining how fountain pens are good for people with weak wrists, carpel tunnel, or hand-cramping issues, but none of these are problems for me. A post at Goulet Pens even mentions that fountain pens can save you money in the long run, though if this were a major concern, it would be cheaper for me just to swipe ballpoints from bank lobbies.

For me, there’s only one reason that makes sense. All of those blogs touch on it in one way or another, but I think blogger Ed Jelly puts it best: “Maybe it’s the inner pen geek speaking, but I find it fascinating that there are several parts and either a steel or gold piece of pointed metal that deliver ink to page. Capillary action draws ink from the internal reservoir through a feed to regulate the flow, all the way to the tip of the pen… Different pens have different filling systems and clear pens (called ‘demonstrators’) let you see all the inner workings. Tell me that isn’t more interesting than your standard ballpoint?!” In other words, fountain pens are just kind of neat.

So, in order to learn about fountain pens and decided for myself whether they’re worth the trouble, I’m starting this new series of posts to explore them. Because fountain pens come in a wide range of varieties – different types of nibs, ink refill systems, barrel materials, etc –  I intend to look at a broad spectrum. And I’m beginning with the simplest fountain pen on the market, the Pilot VPen.

At $2.60, the Vpen is also probably the cheapest fountain pen you’ll find on the market, and it definitely looks the part. Its body is light and made of plastic, It’s non-refillable, and entirely disposable. Still, it was fun to use, and surprisingly smooth.

Of course, nobody would consider this a great pen. The ink flow skips in and out occasionally, and it bleeds through paper fairly easily. A decent gel pen beats it any day, but it nevertheless has me looking forward to trying another fountain pen. And perhaps next time I’ll spend  few more dollars. 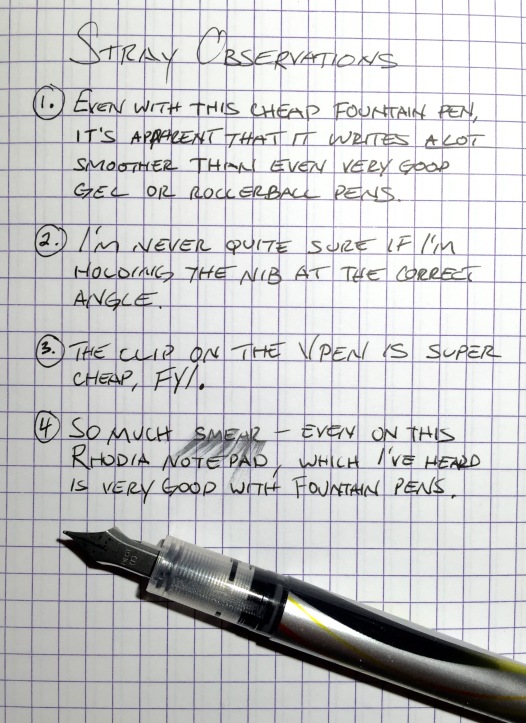 I generally like writing with porous-point pens, and the Monami Plus Pen 3000 is no exception. And while their slogan – “touch of humanity” – is a bit confusing, the pen draws a good, clean line. However, that isn’t to say that the Plus Pen 3000 is without flaws; it certainly has a few.

To start, the body of the Plus Pen 3000 is very cheaply made. It’s composed of a thin, black plastic that flexes and bends. It has no grip, and it’s not particularly comfortable to write with. It also has a very short cap with no clip. So basically, it’s not the type of pen you’d want banging around in your bag or backpack, or else the cap might easily be knocked off and ink-stain everything you own.

Still, as a porous-point pen, it creates very neat lettering when writing. The ink has a moderate amount of smear, and I wouldn’t want to rely on it in a pinch. But a dozen of these in a pen cup would work fine – just call it the poor man’s Sharpie Pen.

The Pentel R.S.V.P can probably best be described as a budget pen. It’s a step up from the cheap ballpoints often found in office supply closets but less expensive than more “premium” ballpoints like the uni-ball Jetstream or the Pilot Acroball. It mostly performs like a typical ballpoint pen – it’s not particularly smooth, the ink isn’t particularly dark or rich, and there’s also the occasional appearance of ink blobs, which love to smear themselves across the paper.

To its credit, the R.S.V.P. provides a steady stream of ink. I never once had to scribble on scrap paper to reboot the ink flow, a common problem with ballpoints. You also get plenty of ink the cartridge, which lasts quite awhile. And Pentel has wisely included a rubber grip, an often missed feature for ballpoints, which typically require a firmer hand to write with.

Overall, the R.S.V.P. fills that “budget pen” space perfectly. It’s certainly a nice step up from a junky office pen, but you’d probably be better off throwing down an extra dollar or two to buy something that looks and performs a little bit better. 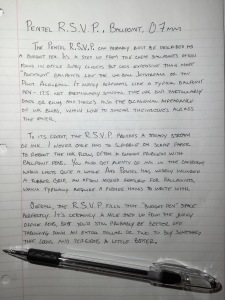 Lately I’ve been a big fan of the Sharpie Pen – they draw such clean lines, it feels like my handwriting always looks better when I use one. So I was excited to play around with this set of six basic colors: black, blue, red, orange, green, and purple.

The blue and green look fairly standard to my eye, but the orange and red are quite bright. On the other side of the scale, the purple is fairly dark. In fact, I would actually consider using the purple in place of a black pen for writing.

These pens aren’t the greatest at filling an area with color. However, this might be a good addition for anyone using Sharpie permanent markers in their artwork, as it could allow for adding more details. And luckily, I didn’t have any bleeding issues with these colors like I did with the standard black Sharpie Pen.