If you’ve heard of the company Skilcraft, it’s probably for two reasons. First, it’s the manufacturer of the U.S. Government Pen, a low-cost, professional-looking ballpoint that also happens to be very reliable. And second, it’s held in high regard by the National Industries for the Blind for employing scores of blind workers in their manufacturing facilities. Skilcraft is a good company, and so I was interested in trying another of the their well-known pens, the stealthy-looking B3 Aviator multi-pen.

As the pen’s name makes obvious, the B3 Aviator is marketed towards pilots. It meets the FAA’s “FOD” requirements, and it has a matte black finish to prevent glare. The multi-pen has three components: a 1.0mm black ballpoint, a 1.0mm red ballpoint, and a 0.5mm mechanical pencil. The midpoint of the barrel twists in either direction to eject and retract the three tips in turn, and the end-cap also screws off to reveal an eraser.

Oddly, the design and function of the B3 Aviator is pretty much identical to the Zebra Surari Sharbo 1000. So, it probably goes without saying that the problems I had with the Sharbo are the same problems I have with the Aviator. In particular, there’s no indication on the barrel for which tip is selected (you have to closely examine the tip to know if you’re about to write with black ink/red ink/pencil), and the cap that covers the eraser is a small piece that’s begging to be lost. For some reason, I also had some trouble getting the Aviator’s pencil lead to eject without breaking.

But, unlike the Sharbo, the Aviator feels a lot more substantial and durable – for about $18, you don’t feel like you’re getting ripped off. But that’s all that this pen really has going for it. The refills are fine, and it generally works okay. However, I still wouldn’t recommend this multi-pen – the design just isn’t very good.

I’ll admit, I wasn’t quite sure what I’d gotten when I purchased the Zebra Surari Sharbo 1000. I’d stopped into the Kinokuniya Book Store during a recent visit to New York City, and stumbled on the store’s Japanese stationery section tucked away in its basement. The Surari Sharbo’s bright yellow barrel caught my eye, but since I couldn’t read the Japanese packaging, I had no idea that it was a multi-pen when I bought it.

The Sarari Sharbo 1000 contains two ink cartridges, 0.7mm black and red ballpoints, and a 0.5mm mechanical pencil. In order to switch between red ink, black ink, and the mechanical pencil, you twist the pen in either direction around its midpoint. There are no markings on the barrel to denote which you are getting, so I frequently found myself having to examine the pen’s tip to see if I’d selected the proper one.

The red ink is smooth and doesn’t smear, and the black feels somewhat sluggish. After switching to the pencil, the top becomes clickable to eject the lead, and the the finial twists off to reveal a small eraser. The mechanical pencil lead seems fairly resilient but generally not noteworthy. Just be careful switching back to a pen tip, as the lead will snap if you forget to push it back in.

I’m not a frequent user of multi-pens – obviously, I bought this one by accident –  but I can confidently say that better ones exist than the Zebra Surari Sharbo 1000. Though I love the bright yellow plastic barrel, I just never got used to the twisting mechanism, specifically the lack of lead/tip indicator. Perhaps this is something I’d have gotten used to over time, but it is enough of an annoyance that I can’t be bothered to stick with it that long. And for the $20 cost, this multi-pen just doesn’t seem worth the trouble.

P.S. My fiancée insisted that I create this GIF of the multi-pen in action.

As an instrument for writing, I wasn’t particularly fond of the Staedtler Triplus Fineliner’s barrel shape, a unique design that resembles a rounded-off triangle. But for drawing and coloring, this design seems to work pretty well. Almost like a grip, the flat edges allow for a little more control, whereas fully rounded and smooth barrels can sometimes slip in your hand.

This six-color set, is fairly standard in terms of color variation, so they could work well for utilitarian tasks like taking notes and editing papers. However, these pens are also very good at filling in areas and creating clean lines, so I’m inclined recommend them for more artistic purposes.

It’s also worth mentioning that Triplus Fineliners are “dry safe,” which means that you don’t have to worry too much about capping and uncapping these pens – they take days to dry out. So, if you’re working on something especially detailed, it will save you an extra step when going back and forth between colors.

But no matter what you might use them for, they are really a quality set of pens. In fact, I might have to look into adding a few more colors to my collection.

Note: that alien looks a lot more menacing than I intended.

The Pentel R.S.V.P. is a pen that’s ubiquitous to the school-supply isle. It’s nicer than the cheapo pens you’ll find in the typical office supply cabinet, but it’s inexpensive enough – and durable enough – that you could probably throw it into a kid’s backpack without much thought. This eight-color set of Pentel R.S.V.P. ballpoints follows along those same lines; they work, but there’s little that’s noteworthy.

The colors included here all feel fairly basic. The blue, red, purple, and green lend themselves best to utilitarian tasks like grading papers or taking notes. The orange, light blue, and pink are a bit brighter, but still might be best suited to highlight or mark passages in a book. Drawing, doodling, or coloring is best treated as an after-thought.

These R.S.V.P. colors don’t provide a particularly smooth or smear-free writing/drawing experience. Color with them too long and you’re bound to find ink blobs smeared across the side of your hand. And despite the soft grip section, hand-cramps are likely to occur after only a few minutes of continual use. Like most ballpoint pens, the ink works great for shading and darkening (depending on how hard you press down on the paper), but they don’t fill in areas particularly well either.

These pens are best put to work in a calendar, textbook, or notebook – anywhere drawing, doodling, or coloring will be secondary.

When I reviewed the standard black Zebra Sarasa, I called it a pen that failed to stand out alongside a sea of similar options, and I felt very similar when I cracked open this 10-pack of Sarasa colors. Included in the pack is a black pen plus three shades of blue, two shades of green, a red, a pink, a violet, and a brown. Oddly, orange and yellow – standard colors in larger sets – are absent. 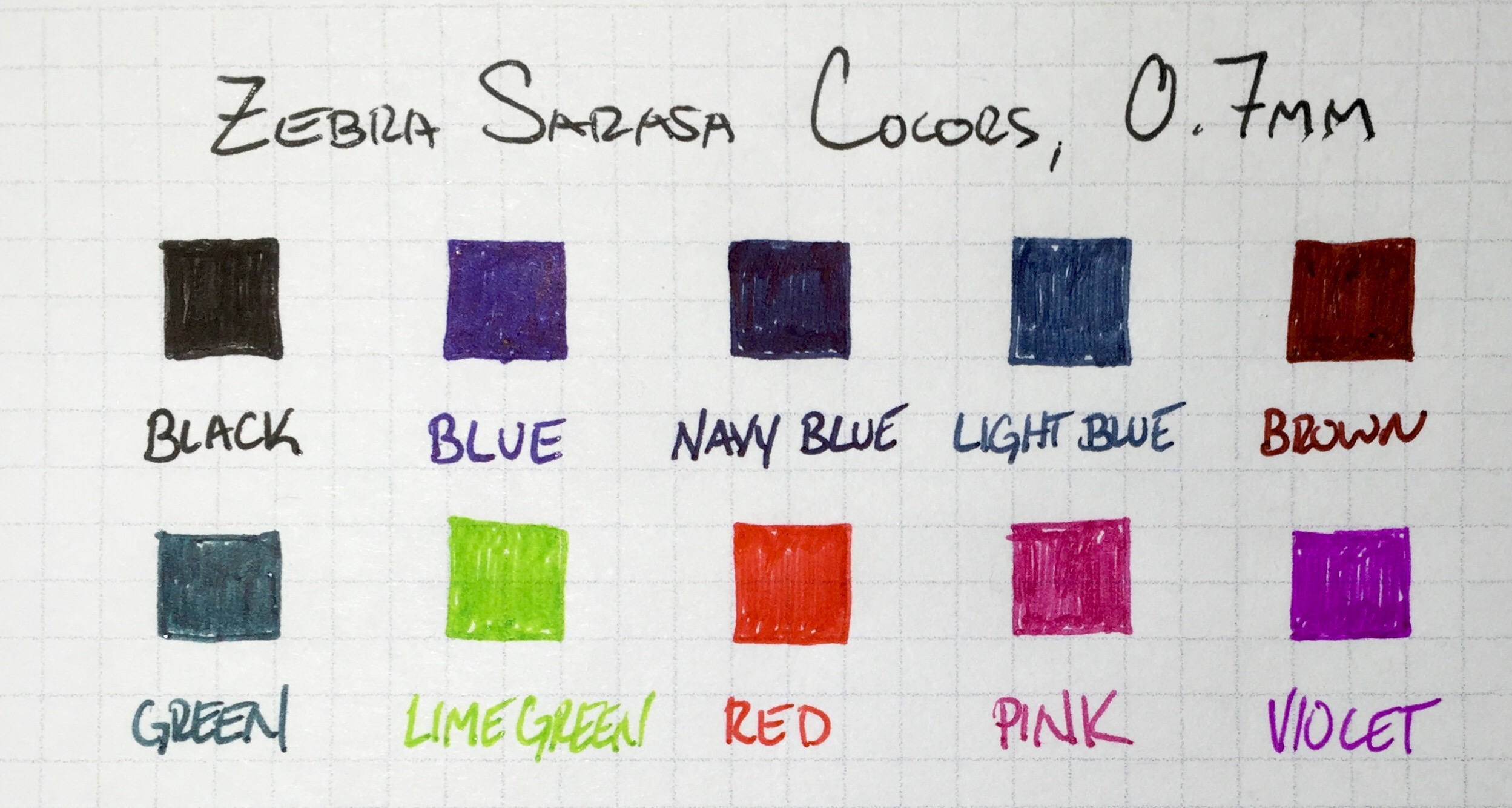 I quite like the aquatic hue of the light blue and the reddish tinge of the brown, but none of the other colors stand out as anything special. The pens are relatively comfortable to hold, and the ink is relatively smooth. The Zebra website also touts its “rapid dry ink technology,” though the pens still manage to smear somewhat.

If you already have a stash of colored gel-ink pens, you aren’t likely to find much new here. However, these will do fine as a standard set of color pens. At the very least, that brown ink will look good in my notebooks.