The Staedtler Triplus Fineliner is a porous point pen, similar to the Sharpie Pen or the Monami Plus Pen 3000, but the most interesting thing about the Triuplus Fineliner is its shape. Instead of a standard round barrel, the body is more of a rounded-off triangle. According to Staedtler’s website, this shape is meant for “relaxed and easy writing,” which I’m not so sure about, but it definitely prevents the pen from rolling off my desk. 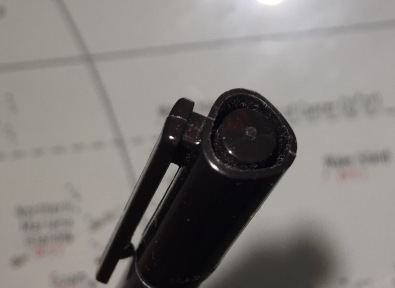 As with most porous-point pens, the Triplus Fineliner produces those consistent and clean lines that make all handwriting look a little neater. Compared to the Sharpie Pen, one of my top five pens, the ink appears a tiny bit darker and smears a tiny bit less, but those differences are trivial. The big difference comes down to the barrel: which one is more comfortable?