Back in August 2016, the SQ1 by RNG (Rise-N-Grind) Products was successfully funded on Kickstarter to the relatively modest tune of $10,299. To be fair, at $25 per pen, it’s probably one of the least expensive Kickstarter pens I own, yet it’s still a pen that I happen to like. And, frankly, there’s a lot to like about the SQ1, not least of which is the “shipwrecked copper” cap.

Though other color options/combinations were made available through the Kickstarter campaign, I chose these weathered ends against an anodized blue barrel. It’s one of the coolest-looking pens I own, and it’s a killer piece for the pen holder on my desk. It’s pleasant to write with too; the grip section is patterned with divots that add a nice visual and practical touch. It’s comfortable to hold, and the included Fisher Space Pen refill is always a great choice.

Since the SQ1 is made from CNC-machined aluminum, making it durable and slender, it’s tempting to think of it as an “everyday carry” pen – it is, in fact, advertised as such. However, I think this classification is a mistake. For one thing, the cap screws on and off, requiring four full, squeaky rotations. Though there is threading at the top of the pen that allows for posting, it’s still a little tedious – tedious enough, anyway, that you wont want to be using the SQ1 for taking short, frequent notes.

Additionally, the SQ1 has no clip, a trait that has caused me trouble in the past. If you wish to take this pen out into the world, you must be very mindful of it, lest is roll off a table or fly out of a pocket. Instead, this is a pen that would be good for taking long notes during a lecture or meeting. It can bang around a bag without trouble, yet still be fashionable and functional when it’s time to sit down and write.

With its clear plastic body and black trim, the uni-ball Power Tank might look like an average “premium plastic” pen, but there’s actually a bit more going on inside the barrel. The Power Tank uses a pressurized ballpoint ink refill, similar to the Fisher Space Pen, the Pilot Down Force, and the Tombow Airpress. This means that, like these other pens, the Power Tank can write upside-down or on rough, wet, and dirty surfaces. But unlike these other pens, which typically cost around 10 dollars, the Power Tank can be easily found for about $2.50 per pen – the least expensive pressurized ballpoint on the market. 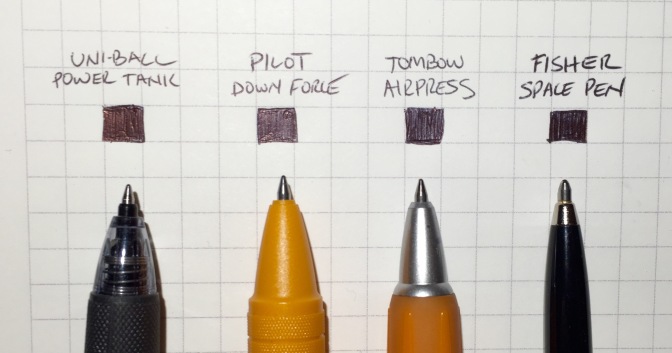 The Power Tank may not be the fanciest or most colorful pen in its category, but, frankly, you get your money’s worth. The ink is relatively smooth and dark, and though the clip and grip aren’t the best, they are certainly adequate. Overall, it makes for a good and inexpensive alternative to other pressurized ballpoints.

If you’re looking for a pen that you can use anywhere – one you can take traveling, for example – then the uni-ball Power Tank is a good option, especially if you’re concerned about losing a nicer, more expensive pen. For two or three dollars, you might treat it better than a ten-cent BIC Cristal, but it wouldn’t be a big deal to misplace it either. And even though I enjoy my Fisher Space Pen, it’s also nice to have a few Power Tanks lying around for whatever grab-and-go situations come up.

When I think of pressurized ballpoint pens, I tend to think of something small and durable, like the Fisher Cap-O-Matic Space Pen or the Tombow Airpress. These pens are meant to slip easily into a pocket or get banged around in a backpack, ready to write on a dirty slip of paper held up against an airplane window, if need be. Meanwhile, the Pilot Down Force is like the awkward cousin of the pressurized pen category. It’s bigger, clunkier, and it has a clip that juts out a little too far.

Regardless, the Down Force writes just as well as these other pens. Its thick barrel and knurled, plastic grip make it a comfortable writer, and the pressurized ink works at any angle and on most surfaces. The Down Force also has a convenient spring-loaded clip, which ties in with a very unique retracting mechanism. 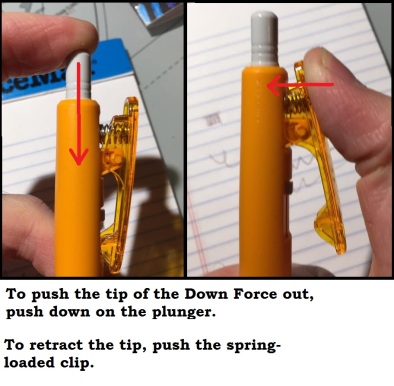 Like most retractable pens, pressing the plunger down will eject the pen’s tip, but it only retracts when opening the clip. It’s a feature that’s meant to prevent ink stains on shirts and pants, since it’s impossible to clip the pen to anything with its tip exposed. I like this feature – it reminds me of a low-cost version of the Lamy Dialog 2 – but it definitely takes a little getting used to.

The Down Force is one of the less expensive pressurized ballpoints on the market, and it comes in an array of neat colors that add a fun personal flair – I went with the orange. In the end you get a good pen, just not one that’s as pocket-friendly or durable as others in its category. I like it, but I don’t think it will ever replace my space pen.

Perhaps you’ve heard this story of the Space Pen:

During the space race of the 1960s, NASA quickly realized that a standard ballpoint pen would not work in space, as it relies on gravity to function properly. So, after spending millions and millions of dollars, they developed the Space Pen.

The Russian cosmonauts were faced with the same problem. They just used a pencil.

It’s an interesting story about government waste, bureaucratic incompetence, and the elegance of a simple solution. Of course, the story is mostly a myth.

In truth, NASA did originally use pencils in space – both wood-case and mechanical – but they were worried about the tiny bits of eraser, graphite, and wood shavings. All this detritus would float around the spacecrafts’ cabins, potentially damaging sensitive electronics and creating a fire hazard. Then in 1965, Paul C. Fisher  approached NASA with an invention; a ballpoint pen with a pressurized ink cartridge. After testing it for a couple of years, NASA agreed to use the Space Pen, paying Fisher six dollars per unit.

Today you can buy the Fisher Space Pen in several different models and styles, such as this Cap-O-Matic version with a tiny space shuttle embossed in the middle of the barrel. It’s on the small side, comparable in size to the Zebra F-301, making it a pen that’s not particularly comfortable to write with for long periods of time. However, the pressurized ink definitely has advantages that aren’t offered by many other pens. Writing upside-down or against walls is the obvious one, but it also works well for writing on glossy, dirty, or even wet paper.

While I’m not personally inclined to pick up the Fisher Cap-O-Matic Space Pen on a regular basis, it will definitely come in handy during travel. Those who spend a lot of time outdoors will also find a pen like this incredibly useful. It’s got a solid build, and it’s definitely worth the 10 or 20 dollars it costs today. At the very least, people will be impressed that you have the pen that (supposedly) cost NASA millions of dollars to make.

If there’s one pen that belongs on a construction site, it has to be the Tombow Airpress. With a rubber body and hard-plastic trim, it feels like this pen could take a five-story drop with minimal damage. It has a spring-loaded clip that clings tight. It’s shorter than your average pen, so it nicely fits in a pocket. And it has a thick barrel which makes it easy to grip. Though other colors are available, I find that the orange nicely completes the “construction site” look.

The main feature of the Airpress is the pressurized ballpoint ink cartridge. Each click of the pen compresses the ink, which allows it to write upside down and on dirty surfaces. There’s even a little window added to the barrel that will allow you to view the process. It’s a gimmick, but it makes for a cool conversation point – I like it.

The ink cartridge is small, though it has a good flow and feel. But don’t expect to get blown away by the writing experience. The Airpress isn’t the type of pen you’d use to journal or write a thank-you note. It is, however, a really great outdoor project pen or a take-anywhere pen. 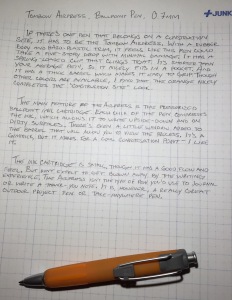