Perhaps you’ve heard this story of the Space Pen:

During the space race of the 1960s, NASA quickly realized that a standard ballpoint pen would not work in space, as it relies on gravity to function properly. So, after spending millions and millions of dollars, they developed the Space Pen.

The Russian cosmonauts were faced with the same problem. They just used a pencil.

It’s an interesting story about government waste, bureaucratic incompetence, and the elegance of a simple solution. Of course, the story is mostly a myth.

In truth, NASA did originally use pencils in space – both wood-case and mechanical – but they were worried about the tiny bits of eraser, graphite, and wood shavings. All this detritus would float around the spacecrafts’ cabins, potentially damaging sensitive electronics and creating a fire hazard. Then in 1965, Paul C. Fisher  approached NASA with an invention; a ballpoint pen with a pressurized ink cartridge. After testing it for a couple of years, NASA agreed to use the Space Pen, paying Fisher six dollars per unit.

Today you can buy the Fisher Space Pen in several different models and styles, such as this Cap-O-Matic version with a tiny space shuttle embossed in the middle of the barrel. It’s on the small side, comparable in size to the Zebra F-301, making it a pen that’s not particularly comfortable to write with for long periods of time. However, the pressurized ink definitely has advantages that aren’t offered by many other pens. Writing upside-down or against walls is the obvious one, but it also works well for writing on glossy, dirty, or even wet paper.

While I’m not personally inclined to pick up the Fisher Cap-O-Matic Space Pen on a regular basis, it will definitely come in handy during travel. Those who spend a lot of time outdoors will also find a pen like this incredibly useful. It’s got a solid build, and it’s definitely worth the 10 or 20 dollars it costs today. At the very least, people will be impressed that you have the pen that (supposedly) cost NASA millions of dollars to make. 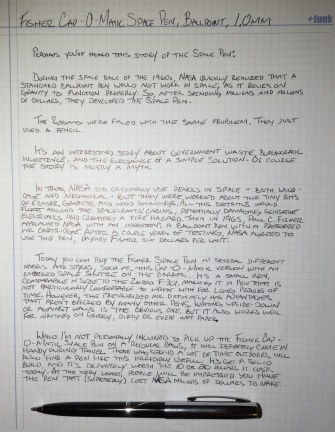