Since Muji has only a handful of retail locations in the United States, I make sure to visit whenever I’m in proximity to one. So when I was in New York a couple of weeks ago, I hit up their SoHo location and picked up a few fresh Muji pens, including this $1.50 gel. If you know Muji, then you’re probably familiar with the company’s “no-brand” products. Unlike your BIC Cristals and Pilot G2s, this pen doesn’t really have a name, but it’s simply referred to as a “Smooth Writing Gel Pen.”  Though there’s a little bit more to it than that.

Unlike the standard Muji gel pen I sometimes see in the wild, this pen is retractable and has a handy spring-loaded clip. It has a good, dark gel ink that doesn’t smear too much, and as the name suggests, it is a smooth writer. It is also a reliable writer, so you wont be bothered by ink that skips out. If you’ve ever used a Zebra Sarasa Clip, this pen will feel very familiar (in fact, it’s likely that Zebra clandestinely produces this pen for Muji).

My only complaint with Muji’s Smooth Writing pen is that I don’t really like the grip section – the rubber grip has an odd “pencil eraser” feel to it. Though, admittedly, this doesn’t bother me so much as to make me stop using the pen.

If you’re going to be at a Muji store any time soon, then maybe grab one or two of these on your way to the check-out. Otherwise, if you’re looking for a decent gel pen with a spring loaded clip, then it’ll probably be easier to find a Zebra Sarasa Clip instead. You’ll hardly notice the difference anyway.

Last year Sheaffer jumped on the merchandising train and made a handful of Star Wars themed pens. Not that it’s a bad thing. While I have mixed feelings about the most recent spate of Star Wars movies, it turns out that I like these pens a lot, even though they are just a re-skinned version of the Sheaffer Pop. Luckly, the Pop is a pretty good pen by itself.

The Pop comes in ballpoint and fountain pen models and are typically found in bright, solid colors. But I’m keen on the gel pen* versions of R2-D2 and BB-8 (though they also have Darth Vader, Death Star, Kylo Ren, and Yoda designs). These barrel designs are detailed, fun, and it’d be safe to assume that any Star Wars fan will get a kick out of them. I also really love the 0.7mm gel refill for its smoothness and deep black color, though the ink will smear some.

As for the Pop’s rubberized grip, I could do without it. Not only do they wear out over time, but they tend to feel pretty cheap. However, the pen’s thickness makes up for it by making it comfortable to write with,  and it also has a sturdy, metal clip and cap that posts pretty well.

My only real gripe with these Star Wars Pops are their cost. With a plastic body and aforementioned rubber grip, it just doesn’t seem like it should be $20+. The non-Star Wars versions can be found for around $15, which seems more reasonable – I guess Sheaffer has to recoup the expensive Star Wars licensing fees somehow. Although, if you’re willing to spend that extra money, these pens are pretty cool.

*Sheaffer labels it as a “rollerball” pen, but according to the markings on the refill, it’s actually a gel pen similar to this one (except the model number is 0917).

The fidget toy craze has obviously crested. Sales seem to be waning, claims that they improve focus have become ever more dubious, and I haven’t seen that Fidget Spinner kiosk at the mall in a while. But sometime late last year I decided to back In[k]ception by first-time Kickster creators Jeffbona. It’s an aluminum pen that includes a fidget-spinning mechanism on the top end.

The design of the pen is actually pretty minimal. There’s no clip, no textured grip section, and no knock. To eject and retract the tip, there is a thin, metal band with a notch that twists (and digs into your finger a bit). And, above this band, you can give the top-quarter of the barrel a flick with your thumb and it will silently spin for 30 to 45 seconds.

Despite the gimmick, there’s nothing remarkable here, and, yet, I still found myself flicking the spinner over and over. As the type of person who has the urge to click-click-click retractable pens all day, this pen grew on me. Though I take some ribbing at work over the “rose gold” (metallic pink, really) color, I’m sure my coworkers appreciate that fidgeting with this pen is practically silent.

For non-fidgeters, there’s not much to recommend in the In[k]ception. It’s a bit top heavy, the retracting mechanism is somewhat uncomfortable, and though the 0.4mm Schneider Gelion 39 (gel) ink is quite dark, it’s also surprisingly thick and smeary. Besides, the pen doesn’t seem to be available outside of Kickstarter (yet) anyway. So if you want something with a similar look – but without the fidget attachment – see the Baron Fig Squire, or if you want another pen that’s good for fidgeting, check out the Pilot Down Force.

It seems that when a gel pen reaches a certain threshold of populairty, it inevitably gets a metallic upgrade: Pentel created an “alloy” version of their Energel, Pilot turned their blockbuster G-2 into the G-2 Limited, and now Zebra has made a “Grand” version of their Sarasa. The barrel of the Sarasa Grand is made of brass, and, as you’d expect, it’s a hefty pen. It is bottom-heavy in particular, so it only takes a light touch to get the ink flowing.

The barrel comes in four colors: black, navy, pink, or (my choice) gold. There’s also a great accent on top of the knock (a little plastic jewel), and a window underneath the clip that is supposed to allow for a view of the refill’s ink level. However, the view is so limited that we’ll just have to call it a decorative window. Additionally, there are grooves on the grip section that do a good job of increasing friction, which will help to prevent your fingers from slipping while writing.

Generally I really like the Sarasa Grand, though that comes with one major caveat: the lever of the spring-hinged clip extends way too far above the barrel. It sounds like a small complaint, but this lever gets in the way whenever I try to click the pen. Similarly, if you ever click your pen upside-down on a desk, it’s not possible here – the clip blocks you.

If this sounds like a silly complaint, then definitely get yourself a Sarasa Grand. Everything else about this pen is good. But for me, this clip issue is annoying – not enough to make me hate this pen, but enough that it’ll probably end up collecting dust in a pen cup.

Besides aesthetics, the Classic press has a comfortable, rubbery grip, and gel ink that produces a respectably dark, low-smear line. Unfortunately, this is all undercut by the fact that the refill skips out much, much to frequently. When using a classic press, a scratch pad and patience for re-writing letters/words are both must-haves. I had initially hoped it was just one bad refill – a dud – but all the pens in the 18-pack I bought have this same problem.

At 60 cents per pen, the Classical Press was significantly less expensive than most other premium plastics, but it’s still not worth it for what is ultimately a frustrating writing experience. If you want a nice gel pen in the 1 or 2 dollar range, you’re better off just sticking with the Pilot G-2 or, even better, a uni-ball Signo 207. Just be sure to steer clear of the Classical Press – a slick design is no substitute for a poor refill. 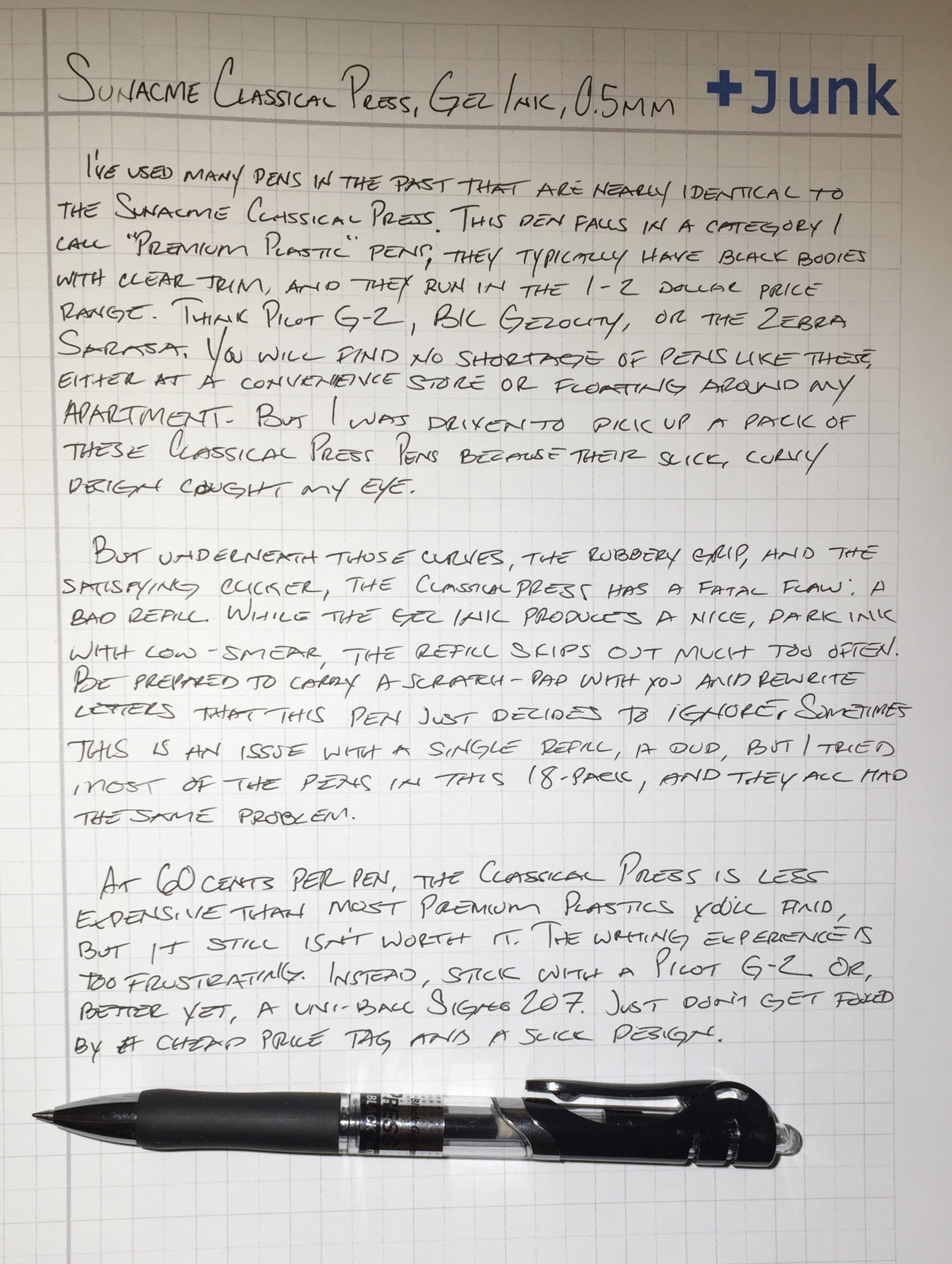